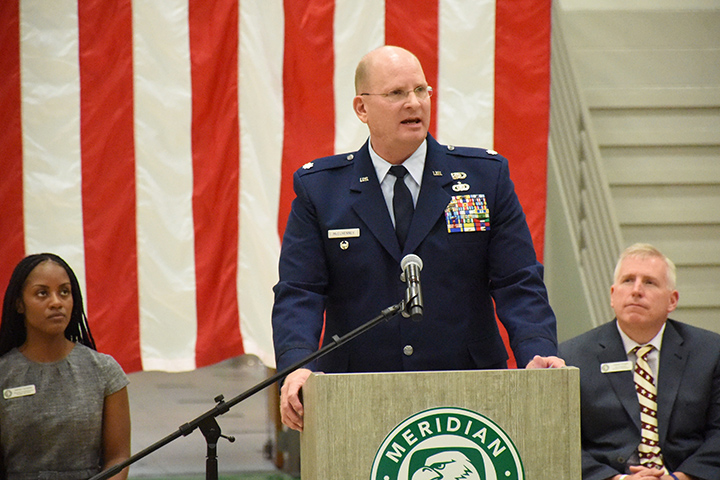 With a nod to the Greatest Generation and a salute to College vets, MCC honored all who served, both campus and community members, during its annual Veterans Day program on Nov. 11 in the Graham Gymnasium.

Keynote speaker Lt. Col. Eric J. McElhenney, an MCC alumnus, told the audience the nation’s veterans number less than 2 percent of the country’s citizens. “I think military service is one of the highest callings a person can have,” he said.

As executive officer of the 186th Air Refueling Wing, Lt. Col. McElhenney oversees the Wing Staff functions for Key Field Air National Guard Base and provides staff assistance to the Commander and Vice Commander. “Regardless of which branch of the military served in, Amy, Navy, Air Force, Marines, Coast Guard, this day belongs to the vast generations of patriots,” Lt. Col. McElhenney said.

He also directed his comments to special audience members, those individuals from the Greatest Generation. “What you did for our country, we can never repay that debt, and we are eternally grateful. Thank you,” Lt. Col. McElhenney said to visitors from Aldersgate Retirement Community.