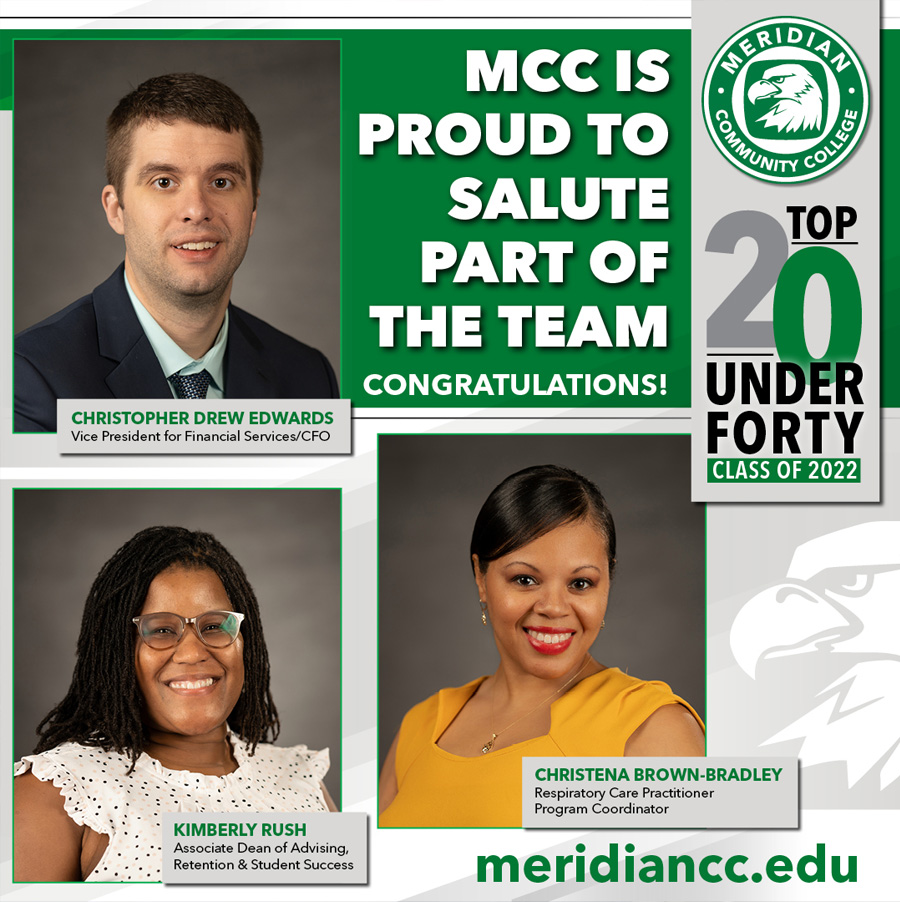 MCCers Drew Edwards, Kimberly Rush, and Christine Brown-Bradley are three of the 20 professionals named Top Twenty Under 40 sponsored by Mississippi Power through a partnership with The Meridian Star and Meridian Life magazine.

A committee selected the honorees under the age of 40 from more than 50 nominations from members of the greater Meridian community. They demonstrate excellence in their professions but also their commitment to the community. According to the magazine officials, they are the area's emerging business leaders, educators, spiritual leaders, military personnel, medical professionals, and people from all walks of life.

"These individuals represent the best among their peers and have shown their commitment to the future of our community," said Ida Brown, editor of Meridian Life magazine.

Brown-Bradley is the program coordinator and instructor for the Respiratory Care Practitioner; Edwards is the vice president for financial services and chief financial officer; and Rush is the associate dean of advising, retention, and student success. All were surprised and honored with the recognition.

An MCCer for four years, Brown-Bradley noted the College has been instrumental in her career. "I feel as though MCC has allowed me the platform to grow in my abilities to help others," she said.

Edwards said being named to the list is an honor that carries the responsibility to work toward bettering the community.

He noted the College had supported him greatly since his arrival four and a half years ago. "The people I work with have been very supportive and encouraging. It helps to work at a place where everyone has a good attitude and the same goal.”

Rush echoed the sentiments. "MCC has let me fly, and I mean that," she said.

When she started at the College in December 2022 as director of advising and retention, she was able to implement several student-centered programs and secure grant funding to provide resources for students. "I am thankful that Dr. Huebner and others give me the support needed to make so many things possible for students in a relatively short time," Rush said.