That’s how the (foul) ball bounces 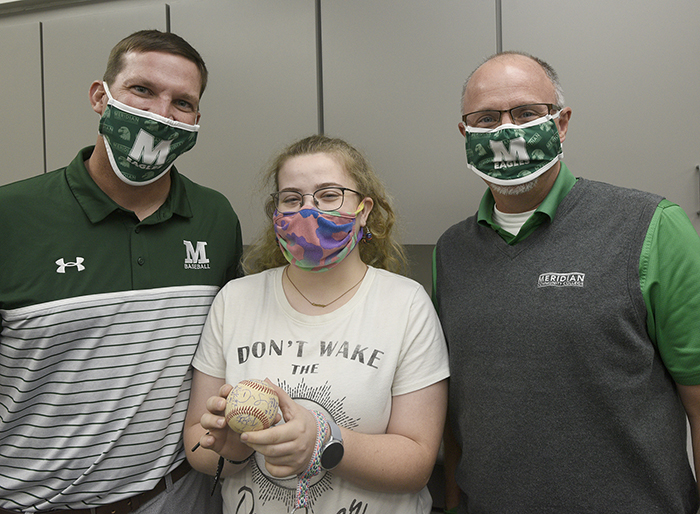 Courtney Carney describes herself as a Meridian Community College sophomore who loves memories. Thanks to an odds-defying foul baseball, she’s collected another reverie.

“I actually wrote a comic book about it,” the Enterprise resident said, recalling the day on campus when a baseball errantly traveled outside the confines of Scaggs Field, zoomed into the patio of the Quave Student Life Center and landed on her leg.

Carney and a friend were studying (“just chillin’,” she said), while sitting on the patio waiting on a pizza order delivery as a baseball fall exhibition game was being played some hundreds of feet away. All at once, a speeding 5-ounce object of leather and yarn struck her leg. “And it just hit me, and I was like, ‘Oh, my gosh. My laptop.’ It didn’t hit my laptop,” she said.

At that moment, Carney was excited – a baseball from seemingly out of nowhere was in her possession, a memory-making keepsake. But just as quickly as that ball appeared, it was soon to vanish.

“I got the ball, and a man came up and said, ‘Mam, the ball?’” A coach yelled for her to throw it back, and she complied. It saddened her to return the tangible memory.

“My friend said, ‘You should message the coach and tell him you want your ball back.’”

“I said, ‘I’m going to go even higher,’” Carney replied, noting the foul incident wasn’t serious, “but it’s that funny,” she said.

So, she dashed out an email to MCC President Dr. Thomas Huebner, an ardent baseball fan himself who too has been the victim of aggressive foul balls, asking if there was any way the ball could be returned to her.

Now, as president and CEO of a community college, Dr. Huebner receives hundreds of emails daily. Carney’s note, though, made his day. “When I read it, I thought, ‘this is awesome.’” Dr. Huebner immediately contacted MCC Head Baseball Coach Dillon Sudduth, and the two came up with a plan.

Sudduth and members Eagles baseball team autographed a baseball to give to Carney at a surprise presentation in Dr. Huebner’s office. “I’m glad you’re okay,” Sudduth said as he gave her the unique baseball adding, “hopefully, you can catch us at some games in the spring,” he said.

With a new, one-of-a-kind baseball in her possession, Carney has added another memory to her collection while at the same time giving one of her own. In a thank you note to Dr. Huebner, she wrote: “So nice to meet all of you. So thankful to go to a school that laughs and puts students first.”