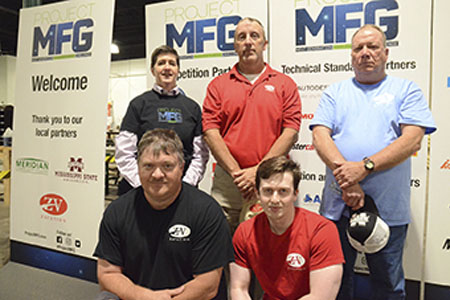 “I figured this would be a cool experience. I’ve never done anything like this before, and I thought it would help me later on,” said Michael Koch, a new graduate of MCC’s Precision Machining Engineering Technology Program and a participant in Project MFG: Next Generation Manufacturing Challenge.

Project MFG is a collaboration of industry, academic and defense partners from around the country. The challenge is a series of event-based competitive skills challenges in which teams, comprised of a mentor paired with student machinists and welders, compete in five-axis machining and welding skills in a two-day competition.

“It was pretty cool to experience this,” said Hover who added he wasn’t too sure of what to expect when signing up for the project.

Taking the $2,000 prize was the Eaton team with members Bryan Pringle of Braxton, Bobby Boothroyd of Madison, Bay White of Flowood and Elijah Boleware of Ridgeland. “It was definitely a challenge … I learned things that I didn’t know,” said Pringle.

The Department of Defense Project MFG developed the Next Generation Manufacturing Challenge to address the critical shortage of skilled works facing the country’s manufacturing industry. According to statistics, American companies are expected to be short 2.4 million

skilled workers over the next 10 years, unless the industry can attract young people to replace an aging workforce in which 2.7 million manufacturing professionals are preparing to retire.

Stressing the need for trained workers, Adele Ratcliff, director, industrial base analysis and sustainment program with the U.S. Department of Defense, said events like the challenge serve as a way to channel students into manufacturing industries. “Serving in manufacturing is serving your country,” she said.

“It was pretty cool to experience this,” said Hover who added he wasn’t too sure of what to expect when signing up for the project.

When asked if they would participate in the challenge again, members from both teams said yes.

MCC students Cole Breland, Michael Koch, Daniel Gordon and Will Poffahl received a cash award for their participation in the event; Sean Datusch, Nick Ray, Daniel Miller and Wayne Cook each receive a $1,500 scholarship from SME, another sponsor of the Project MFG: Next Generation Manufacturing Challenge.

Photo: Team Zavation received the top award as the Mississippi Next Generation Manufacturing Challenge winner. Front row from left are Lee Buckley and William Hover III. Back row from left are Adele Ratcliff, director, industrial base analysis and sustainment program with the U.S. Department of Defense, Kyle Johnson and Ricky Fitzgerald.