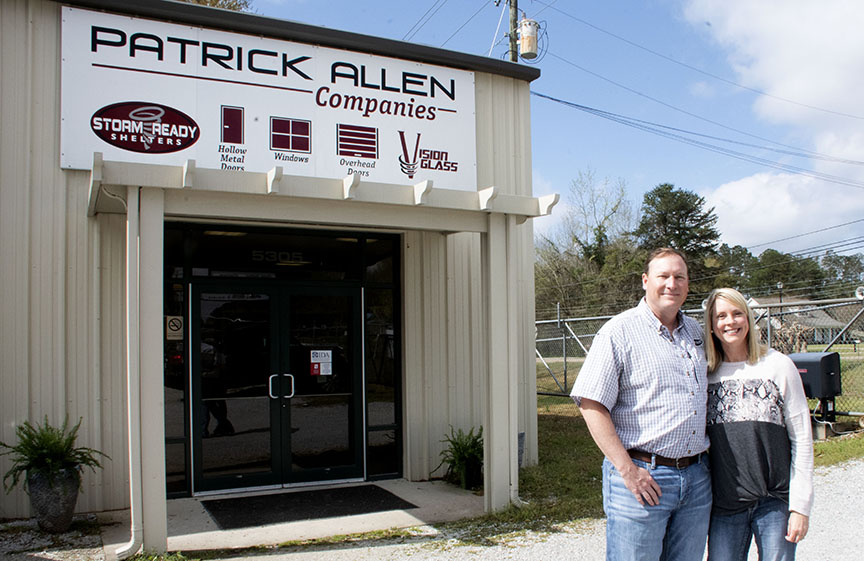 The Patrick Allen Companies was named in lists of top commercial door dealers by the International Door Association. Patrick and Stacy Allen are not only alumni but also supporters of the College and Foundation.

Meridian-based Patrick Allen Companies, a 35-employee strong business that has been in operation for 20 years, has been recognized on an international scale.

The International Door Association (IDA) awarded Patrick Allen Companies the No. 18 spot for the Top 50 commercial door dealers in the United States and Canada and No. 34 for the IDA Top 100 Door Dealers.

The trade association represents dealers in the door and access systems industry and issues the recognitions every two years. The award is based on 50 different components, including sales, employees, years of service, and customer satisfaction.

“We’ve won all kinds of awards, but nothing on this scale,” said Patrick Allen, owner, and president of the company located at 5305 MS-145. “We’re measuring Meridian against the rest of America and Canada and coming in at No. 18 and 34. That’s a huge deal,” he added.

“This is not something that I’ve done; it’s something that we’ve done as a team with all of our employees,” Allen said. He continued, “It’s all of these Meridianites working together that achieved this. It’s not just something for us, but all of Meridian.”

Eager to see his hometown grow, Allen is also a proud supporter of the MCC Foundation.

“We’ve partnered with the MCC Workforce Development for training, and that’s a big help for us achieving what we’re achieving now.” He noted the company and the College’s Workforce staff set up a training program for the company’s workers. Teaming up with Workforce has been an asset in the company reaching its goals.

Allen, who admits he never settles, said he seeks daily improvement on what was accomplished the day before. “I want to get better at everything, every part of the business,” he said.

When Allen started the business two decades ago, he began working on the side and after hours along with his brother-in-law Jamie Followay, who is now vice president of the company. Pitching in was Allen’s dad, Kent Allen.  “We scraped up everything we could scrape up for a long time to make it work. We answered the phones and did the faxing out of the dining room,” he said as he recalled the early days of the business.

“We owe it all to our great team and our great customers and friends who have done businesses with us for so many years,” Allen said. He added that doing business with local businesses greatly helps.

Allen, an alumnus of MCC, has family ties with the College. He met his wife, Stacy, in an MCC psychology class. “The best thing in my life came from MCC – my wife,” he said. The Allens’ daughter Brittany graduated from MCC’s Physical Therapist Assistant Program.