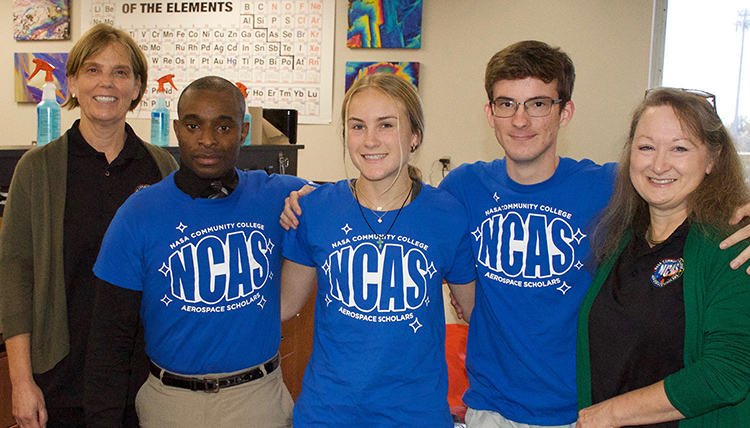 NCAS is NASA’s only STEM outreach program intended exclusively for community college students, and MCC serves as a host site for the national program. MCC has participated in the NCAS program since Fall 2018.  During 2019 and 2021, MCC hosted NCAS career simulation events, one of only 11 community colleges nationwide to host such events.

Valerie Bishop, dean of institutional effectiveness, and Dr. Angie Carraway, chemistry instructor, division chair and the Mississippi NASA Space Grant Campus coordinator, have spearheaded this effort. They were impressed with this year’s efforts, especially because of the pandemic. “The group got, in some ways, a more realistic introduction to the way workforce can work,” Dr. Carraway said.

Working virtually, the participants formed 11 teams to create a company where they arranged a company infrastructure, assigned responsibilities, managed a budget, and developed communications and outreach strategies. And because it was conducted virtually, they had to coordinate with team members who lived in different time zones, who were from different cultures and backgrounds. “They had to overcome challenges like internet access from home… the virtual environment offered a different skill set,” Dr. Carraway said.

In addition to working with different people from around the country, the team members had less than five days to develop the project. “It was a pretty substantial project,” Dr. Carraway added.

MCC sophomore Joy St. Clair, one of the student participants, agreed. “It was a lot more work than I expected, but it was fun,” she said, noting that her fellow team members learned to work with one another with success. “It’s probably the most functional team I’ve ever been on; very professional,” St. Clair said.

She also gained in other ways. “You meet people from across the country with similar interests. I have five friends in California now. I’ve got one in Oklahoma, and we still talk to each other,” she said.

And for her efforts, St. Clair received a medallion for the employee of the week, which the team’s mentor chose.

Caleb Clearman, another MCC sophomore and participant, added, “I had people from all over the country on my team. It was a great experience to meet new people.”

Michael Chaney also enjoyed the collaboration. “Each team gave others encouragement… they were not looking at us as rivals, but as colleagues.”