MCCer of the Month for January: Whitney Stevens 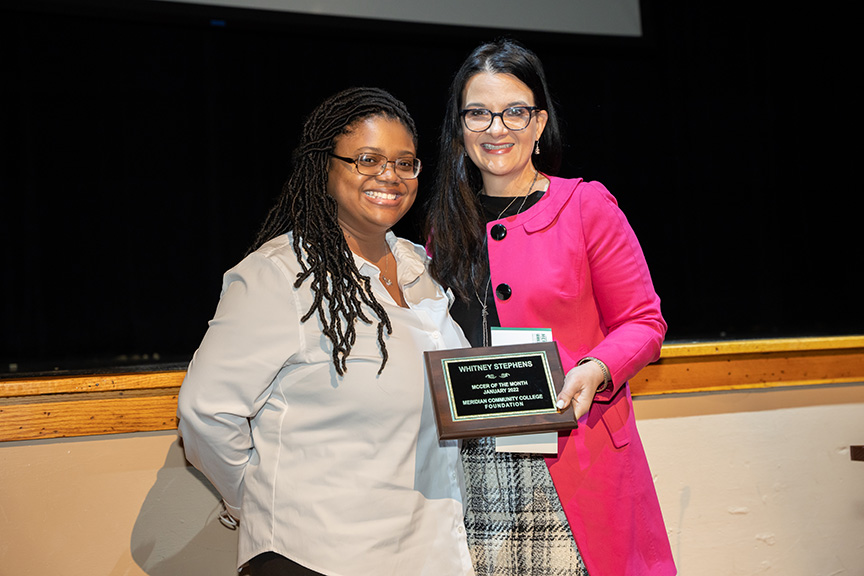 Whether she’s at work or home, or anywhere, helping others motivates Whitney Stevens.

Doing so dovetails to her career. “My favorite part of work is being able to help alleviate some of the financial burdens from the shoulders of my students and families,” Stevens said.

Stevens encounters those opportunities frequently as the College’s associate director of financial aid. Because of her efforts, she was named MCCer of the Month for January. The MCC Foundation sponsors this monthly award to exemplify the College’s hardworking employees who go above and beyond their job duties. Honorees receive a commemorative plaque and a $250 cash award.

As assistant director, Stevens oversees the compliance for financial aid, training for office staff, and come this semester, and she’s assuming the duties of that of military/veterans affairs coordinator. She started working at the College in October 2013.

“I love the lifelong relationships I’ve been able to build during my time here at MCC,” Stevens said. “I’ve developed a family that continues to flourish even once the workday has ended.”

A resident of Montrose, Stevens earned her bachelor of science degree in business administration from Alcorn State University in May 2010 and her master of business administration from Mississippi State University in December 2012. She and her husband, Derrick, met at Alcorn during her freshman year and later reconnected after graduation. “We’ve been married for six and a half years and have an 11-month-old son, Derrick Jr. (Deuce), who is our sunshine after the storm (the loss of my father).”

The Stevens enjoy traveling, listening to music, and photography.