Graduations to come will have a new addition 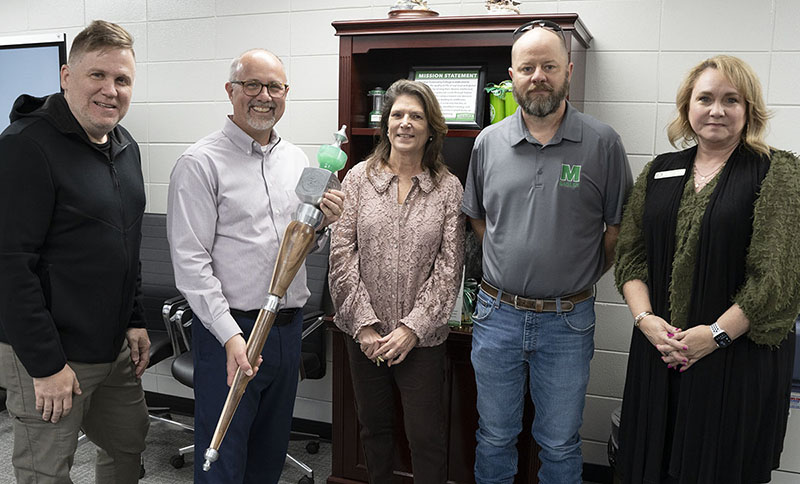 A one-of-a-kind symbol of higher education will soon make its appearance at a Meridian Community College graduation ceremony.

The College's mace, an ornamental club with distinctive markings representing MCC, was presented to President Dr. Tom Huebner. "This is very meaningful to me, and I think it will be for the College," said Dr. Huebner.

The mace is used on formal academic occasions, such as commencement, when participants are in full regalia, and the president is involved. It signifies the proceedings have official sanction.

MCC’s mace was designed through a collaborative process, said Lori Smith, dean of workforce education, explaining instructors from Graphic Design, Construction Trades, Precision Machining Engineering Technology, 3D CAD Engineering, and art all contributed to the creation of the mace. Smith said to Dr. Huebner as she presented the mace to him, "You commissioned it. We designed it. And so here it is."

Made of black walnut and maple wood, resin, and aluminum with a centering rod to connect the pieces, the mace is 42-inches long and weighs nearly 15 pounds. The College's eagle and the seal are engraved into the metal.

The tradition of the mace goes back to medieval times when knights carried them during processions with their kings, and as times passed, the mace became a ceremonial symbol of peaceful leadership. In the academic world, the mace symbolizes college's governing authority.

Dr. Huebner noted the decision of who will carry the MCC mace during a graduation ceremony would be decided soon.