Backstage and in front of the lights, Hunter Dungan returns to Stage 2 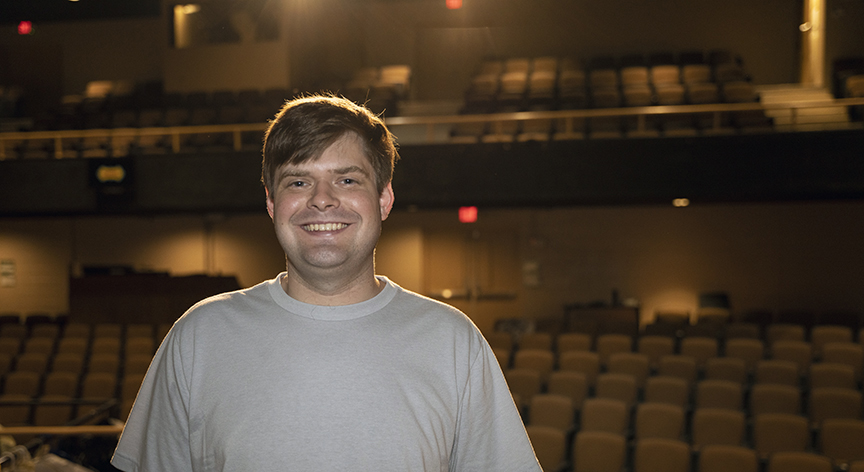 “Basically, I’ve been back every summer,” said Dungan, 26, as he paused from collecting props for Stage 2 production of Annie Get Your Gun, a musical set for June 24-26 in the MCC McCain Theater.

Dungan, studying for his master’s degree in teaching at Belhaven University, is both behind the scenes and on stage in this presentation by the Arts & Letters Series. He’s also a recipient of the Riley Foundation Summer Work Program Opportunity.

The Riley Foundation offered non-profit organizations, including the MCC Foundation, the opportunity to apply for a grant to hire a college student for the summer. The MCC Foundation supports the Arts & Letters Series and Stage 2.

A theatrical training group for youths 13-19, Stage 2 participants learn more than just lines; they are involved in committees, helping with costumes, set design, props, advertisement, and fundraising. In addition, emphasis is on character development, teamwork, and community service.

Dungan was selected as the intern to help with all the duties related to the production – including being present at all rehearsals. “I’m building set,” Dungan explained. “I’m back here making door frames, making whatever they need – with my production team as well. And I’m learning dances. I’m in the show as well as Foster Wilson. He’s the person who discovers Annie and introduces her to the Wild West Show,” he said.

When he was a junior in high school, Dungan joined Stage 2. “Even when I was in college, I loved the theater,” Dungan said, noting he would help the production company during his summer breaks. “It’s just something I fell in love with. And I see this as a great opportunity to mentor others who are now in the position I was in when I was younger,” he said.

It’s the experience gained from being a part of Stage 2 that Dungan said is beneficial. “If you want to be a part of something that will teach you valuable experience, whatever interest you have, there’s going to be an aspect of theater that you can engage that interest in,” he said.

Susie Johnson, Arts & Letters Series and Stage 2 director, welcomes Dungan’s help. “He’s been involved with Stage 2 from every angle; student actor and leader, summer volunteer Shakespeare coach, and now as an adult production staff. He’s been a lifesaver for us in terms of practical help and a fabulous role model of ‘Once in Stage 2, Always in Stage 2,’” she said.

And, “he does everything with a good-natured attitude and smile,” she added.

In August, Dungan will begin his new job with Lamar School as an English teacher, drum line instructor, and theater director.