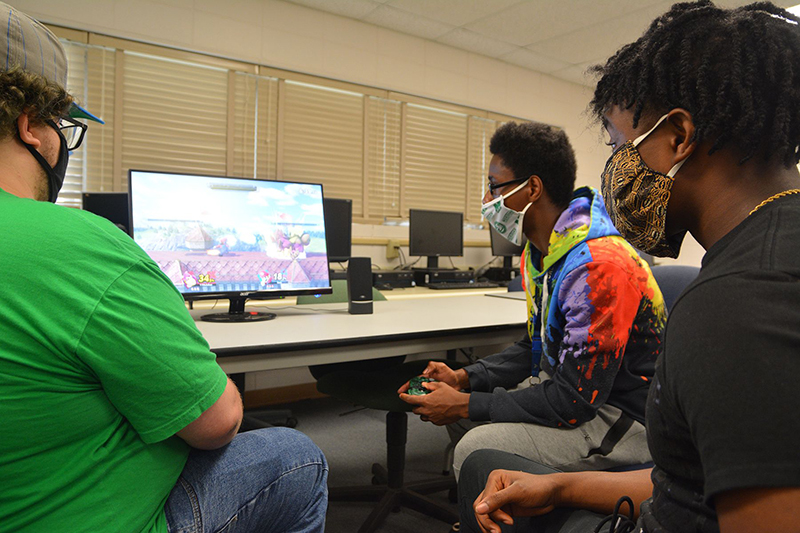 A new sports club, a first of its kind at the state community college level, has a home base at Meridian Community College.

Scientists have documented playing video games for five to 10 hours a week stimulates areas in the brain associated with memory, attention, motor and strategic planning skills as well as eyesight.

“Esports can range across the video game spectrum from sports games like Madden NFL, to First Person Shooters like Call of Duty,” D’Angelo said. He added, “E-fighting is a subgenre of Esports focusing mainly on fighting games such as Super Smash Brothers, Tekken, Mortal Kombat, Street Fighter and others.”

With Esports, individuals or teams face off against each other in their game of choice. It’s a cooperative activity, noted club president James Snowden. “We wanted to start this to provide a sense of comradery to gamers on MCC’s campus, and provide a space to discuss games and Esports freely and happily,” he said.

Students form teams and create strategies to accomplish their objectives. And just as is with baseball or soccer, Esports participants have roles to play. “Esports is just like regular sports in that it is team-based competition to show off your skill and mental strength against an opponent,” said Snowden.

“Your team may have to work in a coordinated fashion to gain advantage, not unlike traditional sports. Some professional players have fans and endorsements and win championships playing video games,” said Michael Smith, who serves as vice president for the Eagle Esports club.

Smith noted the MCC organization was started to build a network for competitive gamers in the community.

When COVID-19 clamped down the campus and traditional extracurricular activities, Eagle Esports was still able to meet virtually. “One of the benefits of being in this club is that being an active member doesn't require us to meet on campus, given the current circumstances. We have a Discord channel, which is what we use to stream and hold meetings. This is what has allowed us to continue playing games and supporting each other as a community, even when school let out Spring 2020,” Smith said.

For Fall 2020, there are 10 active members of Eagle Esports, and they welcome interested individuals to join. “Our goal is to provide a supportive environment conducive to gaining skill in teamwork and competition for players who wish to reach the next level in whatever it is they want to do,” Smith said.

As for upcoming tournaments, club members are thinking outside the video box. “We are currently discussing a workaround for something similar but without putting anyone at risk,” Smith added.

To learn more about Eagle Esports, contact D’Angelo at MCC at dangelo@meridiancc.edu