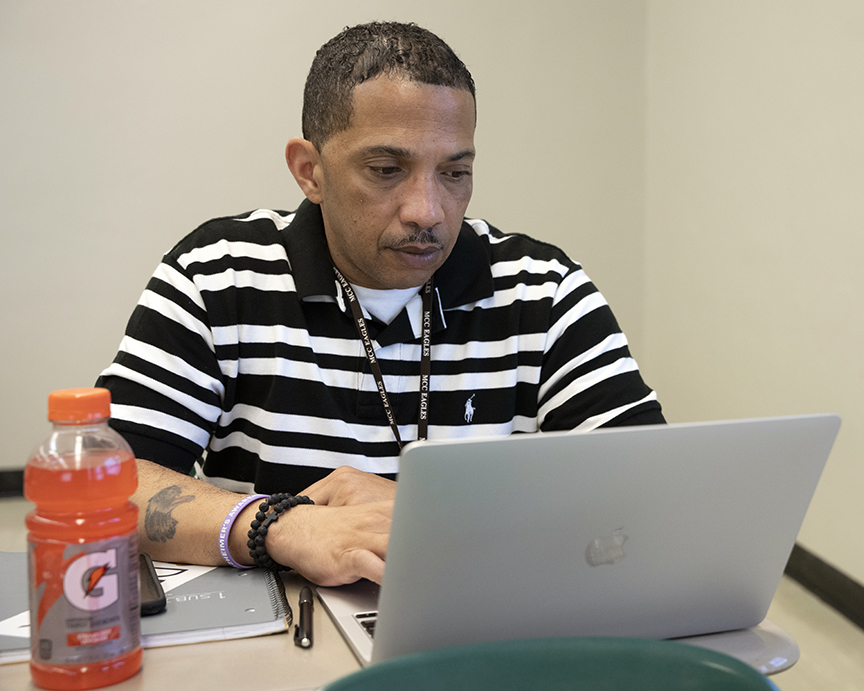 Summer is a great time to get away, get outdoors, and get some relaxation.

For Meridian Community College student Cornelius Griffin, summer is an ideal time to get some college credit under his belt.

A retired Army sergeant from Denver, Colo., now living in DeKalb, Griffin is enrolled in the College's second summer session taking Biology, Computer Applications, and Human Growth and Development. For the first term, he took Micro Economics. On campus, classes meet for two hours a day for five days a week during this term. "I kind of forgot about the fact that summer classes are condensed, and it's giving me a run for my money," he said.

He's up to the task, for Griffin is working toward his goal of a business degree. “That's what my mindset is right now," he said. "I always wanted to know how businesses work, behind the scenes, what goes on. MCC has enlightened me on many matters I didn't even know," he noted.

He credits the College in other ways, too. "One of the teachers who impressed me is Michelle Stokley. She is amazing. Some teachers make a difference and make you want to learn even better because of their attitude, and she's one of them," he said. Stokley is a Computer Science instructor at MCC.

He also gives a shout-out to Ashley Tanksley, director of admissions, who oversees Veterans Affairs matters at the College. Under her guidance, Griffin said he's confident that any matters concerning the VA and MCC will be handled expertly.

During his military career, Griffin has toured the world and has been stationed in various places in the States. Before coming to Mississippi, he did take a couple of classes at a community college in Denver.

Griffin encourages others to further their education. "Showing up to MCC is half the battle. Once you get there and you're in the classroom setting, it's good."

And it's an excellent time to get summer credits.