Making it official: College to serve as site for Queen City Race for Life and Street Strut

All shades of pink and green could be seen in front of Meridian Community College’s Ivy-Scaggs Hall as City of Meridian Mayor Jimmie Smith proclaimed October as Breast Cancer Awareness month.

Campus and community alike turned out to hear the proclamation, which stated the renewal of the commitment to fighting breast cancer and raising awareness and supporting those affected by breast cancer. 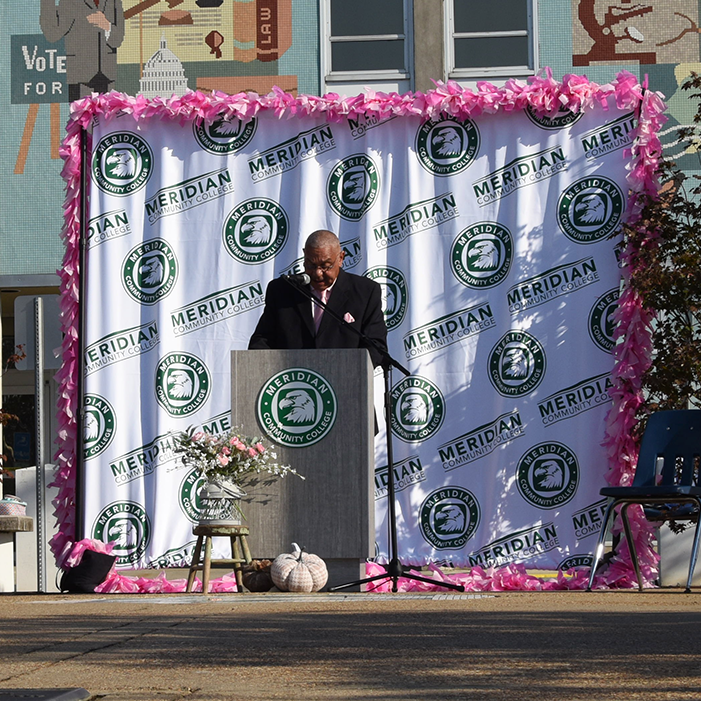 The ceremony also served as a platform to announce the Queen City Race for Life and Street Strut moving to the MCC campus on Saturday, Oct. 23. The race and strut, a long-time tradition held in Downtown Meridian, is hosted by the College’s chapter of Phi Theta Kappa, the international academic honor society for community and junior colleges. Cindy Kane Schrock, an MCC alumna, and Phyllis Holladay, advisor for PTK, joined forces for this fundraiser, which generated funds for the Anderson Cancer Patient Benevolence Fund.

During the proclamation and announcement, Debbie Young, Jennifer Whitlock, Nedra Bradley and Ginny Ruffin were recognized. “We’re excited about these ladies serving as ambassadors for us this year,” said Holladay. “They each have a special tie to MCC and this event,” she said.

All are breast cancer survivors. Holladay said the event is also special to her because of family members diagnosed with breast cancer.