MCC student to use 3D CAD training to build ships 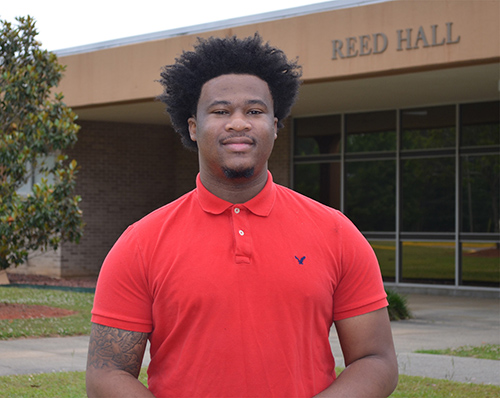 He enjoys using CAD software to create a two-dimensional blueprint, a three-dimensional model or a map from a land survey to better visualize what an object, a building, or space will look like.

“The 3D CAD Engineering program has turned out to be even better than I thought it would be,” said Henry, who graduates from MCC this month. “I like designing things on the computer and I find it all interesting. I really love it.”

A native of Jacksonville, Fla., Henry moved to McComb when he was in the ninth grade. In 2015, he graduated from McComb High School. A year later, his mother, YuLunda Henry, passed away and he moved to Meridian to live with his godfather, Billy Hunter.

“Once I got into computer programming, I decided it really wasn’t what I wanted to do,” Henry said.

So, he continued taking classes as a university transfer student. Then in August 2018, he switched his major to 3D CAD Engineering Technology and discovered his calling.

Students receive hands-on experience with the latest versions of AutoCAD, Inventor, Inventor HSM and Revit, he added. Courses include a variety of projects in computer-aided design, mechanical design, architectural design and computer-aided manufacturing.

Brown said students have the opportunity to take the Autodesk Certified User exams in the leading-edge software AutoCAD, Inventor and Revit at the completion of the program.

Henry is graduating from the program with an associate degree in applied science. Students can also earn a one-year career certificate or a two-year technical diploma through the program. Students who complete the program find jobs in the architectural, mechanical and surveying fields as CAD and engineering technicians, Brown said. Others transfer to a university and continue their education.

Henry already has a job lined up as a designer with Huntington Ingalls Industries, the nation’s largest military shipbuilding company. He will be moving to Newport News, Va., where Ingalls is headquartered.

“I am looking forward to moving to Virginia and starting a new job as a designer, but I am a little nervous about starting over,” he said. Henry said his long-term goals are to get his career off the ground, then hopefully meet someone and begin a family.

“Then I want to live and enjoy life,” he said, especially after the experience of the past few months with the shutdown due to the coronavirus.

Henry said MCC has been good about helping students finish their classes online so they can graduate on time, even loaning him a computer so he could complete his assignments. He was a little disappointed about missing the hands-on projects in the last term since they were working with 3D printining.

Brown said he knows Henry will find success in his life.

“It's been a great opportunity to teach and get to know Kevonte,” he said. “He always has a positive attitude and brings his own unique personality to everything he does. I'm so thankful to God that Kevonte has found a good job and I know he will do great things with his life.”