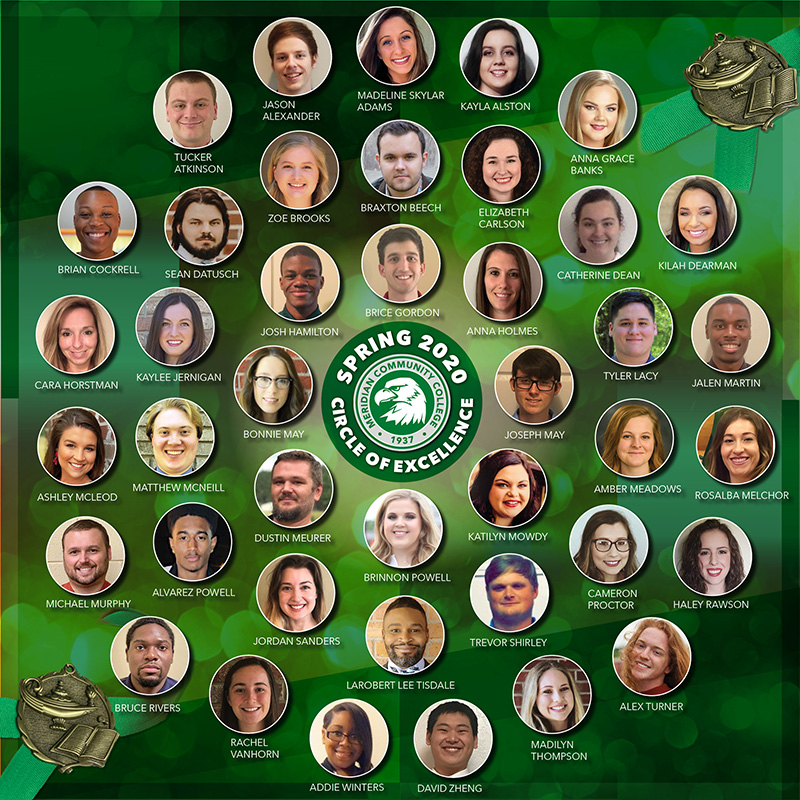 Forty-one Meridian Community College graduates are chosen as members of the Spring 2020 Circle of Excellence.

The students, who studied in both the College’s University Transfer and career and technical education programs, are saluted for their academic achievement, leadership, community service and spirit.

Michael Thompson, dean of academic affairs, said the College established Circle of Excellence designation to recognizes outstanding MCC graduates during graduation ceremonies. “These graduates are nominated by MCC faculty and staff,” he added.

College faculty and administrators applaud the students’ efforts. “To be chosen for this honor means a student performed exceptionally well academically, and was also a contributor to their community in serving others,” said Joseph Knight, MCC vice president for workforce solutions. “Simply put, they are students who strive for academic excellence and help others along the way.”

Honorees are humbled to be selected. “I really appreciate being chosen as a circle of excellence recipient. It is such an honor,” said Haley Watson, who is a student in the Radiologic Technology Program. Citing that she came to the College because it was close to home, Watson said, “ I chose radiology because I have a passion for the medical field and taking care of people.” She recently passed her registry exam, and she plans to continue working as a Registered Radiologic Technologist.

Another honoree, Ashley McLeod, said, “I have had the best year and enjoyed every class I was able to attend.” A University Transfer graduate who will study at Meridian Campus Mississippi State University in the fall, McLeod wants to become a successful graphic designer in Meridian. She credits many of her MCC instructors for helping, including art instructor Terrell Taylor, and Mike Smith, who was her soccer coach. “The MCC administration and instructors really do care about every student’s success,” she said.

MCC President Dr. Thomas Huebner said MCC has a long history of outstanding graduates, and the Circle of Excellence is one way the College recognizes these students who have excelled during their time at MCC. “These students have made an impact on this place, and we look forward to watching them take flight and impact the world,” Dr. Huebner said.